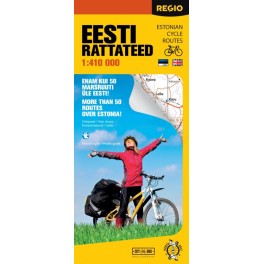 This product is no longer in stock

It's already the fifth, completely renewed edition of the Estonian Cycle map.

Better waterproof and (a bit leather like) flexible paper quality

In Estonia we may find a network of signed cycle routes not bicycle pathes:
These routes are mainly on existing (car) roads. Heavier transport parts are not completely avoidable

On the map - the signed bicycle routes in Estonia

No customer reviews for the moment.